The unconscious forces that prevent us from changing

You worked really hard to change your organisation, so why isn’t it changing? Probably because powerful, unconscious forces are trying to stop you.

We all know somebody at work who seems unable to change regardless of the feedback they are getting. Sometimes it’s easy to see why – the employee has tangible and nameable fears. However, in other cases, the resistance is far more puzzling. An otherwise very capable and enthusiastic person might struggle significantly when asked to do new things. They have requested feedback, coaching and training courses and have learnt a lot of new ideas and techniques – but long-term behavioural change just doesn’t seem to ‘stick’.

The annoying truth is that the vast majority of organisational change initiatives fail to meet expectations. And it is frustrating when someone really wants to change but finds it almost impossible to do so. The good news is that people can work on their capacity for change. The trick is to get to know the unconscious forces that seem to be working against you. Like a computer algorithm, often your biases are basically trying to help you make good decision as quickly as possible, but unfortunately conscious cognition is side-tracked in the process.

What you are up against

Every day we make hundreds of conscious choices – a certain way of thinking and deliberating that is familiar to us. Should I invest in real estate or shares? Should I marry this person? Should I go on holiday in July? And every day, we make hundreds of unconscious choices – a way of thinking that is much more automatic and includes many of the unconscious biases that so often shape our decisions without us even knowing.

Unfortunately these two different ways of thinking often do not work in synch with each other. Sometimes they will even contradict one another – the result being that we often side with our unconscious thinking, even when we know intellectually that the decision might not be the best one for us.

In other words, when it comes to making decisions it is often easier for us not to think and just let our unconscious do all the ‘heavy lifting’.

When it comes to both individual and organisational change, it is clear that unconscious forces may be at work. Just like individuals often fail at changing their behaviour or firmly established habits, organizational change initiatives often fail to meet expectations. The reason? Our unconscious biases are stopping us from changing our behaviour. And as they are powerful forces, they often succeed.

Broadly speaking, your unconscious biases can be divided into three categories: avoidance of risk, avoidance of regret and avoidance of social exclusion – all powerful behavioural factors.

People have a tendency to prefer avoiding losses to acquiring equivalent gains. In other words, it is better to not lose $5 than to find $5. This is why your mind tells you that it might be better to continue with your existing behaviour than to risk the loss associated with a new behaviour that might not work at all or offers you no guarantee of working better. According to American developmental psychologist Robert Kegan, author of ‘Immunity to Change’, people often become immune to change because they have too many unconscious fears and anxieties about adopting new behaviour. Especially under stress, we cling to what we know because the hidden fears (such as the fear of losing reputation, status or significance) are just too significant. We call this The Loss Aversion Bias.

People are very likely to continue a course of action if it has been the one pursued so far, even though this course of action is clearly not in their best interest. Much like magazine companies that offer free trials of their magazines but then, after the trial has ended, continue to send magazines and charge the customer until he or she actively ends the subscription – an annoying practice with an often counter-productive result.

However, it can be too exhausting for a company to try something new, and in leadership development, this can also be the case – if you are used to not speaking up in meetings, you might simply continue along this course even though you consciously understand that this might not be helping your reputation. We call this The Status Quo Bias.

Making decisions is dangerous! It always contains the risk of making the wrong ones, and your mind is wired to strenuously avoid regret and what might seem like a wasted effort. Rather than considering the odds that an incremental investment would produce a positive return, people tend to ‘throw good money after bad’ and continue investing in projects with poor prospects. This might result in some seemingly irrational investment decisions made by otherwise very rational people. In a leadership development context, it might mean that individuals will continue to practice behaviours simply because they have worked so hard on perfecting those behaviours. The thinking goes something like this: “I realise that my organisation wants me to delegate the more technical aspects of my role, but I have spent years attempting to become an expert in this and that time has to be worth something!” This is why it often takes so much time for people to change their behaviour – they have simply spent too long perfecting it! This is known as The Sunk Cost Bias.

The idea of ‘Post Purchase’ Rationalisation owes a lot to the psychological theory of ‘Cognitive Dissonance’, which was first introduced by psychologist Leon Festinger in the 1950s. It refers to the discomfort thatone feels when forced to hold inconsistent or contrary beliefs at the same time: “I believe in protecting the environment, yet I continue to use plastic bags. This in turn makes me feel bad.” We often try to avoid cognitive dissonance by telling ourselves that there was always a great reason why we made the decision to do things a certain way in the past. In a leadership development context, we might find it difficult to change our mental models if they contradict the ones that we have held in the past. For example, you might argue: “My company might require me and my team to be more direct with each other, but I have always seen myself as a supportive and empathetic manager, and I have developed this reputation in the eyes of my team also. If I change my behaviour, I might be contradicting who I am at my core!”

The Social Desirability Bias is also known as the ‘bandwagon effect’, and this too can be conscious and unconscious to us. Sometimes we follow a course of behaviour that we know will not be good for us in the long run, but we keep doing it because others value it, are doing it themselves or will think badly of us if we don’t do it. This bias reinforces the notion that certain emotions, particularly the emotions of shame and pride, are overwhelmingly strong predictors of behaviour. Applied to leadership development, this might mean that some leaders will follow behaviours that have been ‘normalised’ within their group, even though it may not be good for them as individuals. The American sociologist Diane Vaughan refers to the term ‘The normalisation of deviance’ to describe how some leaders follow unethical or improper routines of behaviour, even though they know it will not help them in the long term. The need to ‘fit in’ may stop us from adopting new behaviours that might be best for us as individuals.

All of these biases are extremely powerful, so it is not surprising that people find it so difficult to change their behaviour. However, it is possible to instigate a variety of methods and techniques that can help overcome some of these unconscious forces – from providing opportunities for trial and practice, to creating space to reflect on our own behaviour, and to the creation of deep coaching relationships at work. 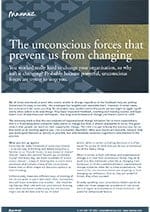 Grow your coaching skills through a highly experiential programme. You will be supported and challenged to develop yourself as an effective coach while understanding the unique strengths you bring to coaching. 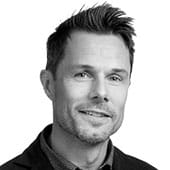 Stuart Schofield is a Client Director working for the International Division, based out of London. He is a chartered occupational psychologist and has had 20 years of experience developing leaders across the globe. He has worked both in London and Hong Kong.

Build your coaching culture in context

Misconceptions of coaching as a manager

I often run into the same set of misconceptions about coaching so I thought that I would take a moment and address three of the most common ones that I come across.

I want to be an internal coach…what should I consider?

Becoming an internal coach within a company is a profession that is growing. More and more, companies are seeing the value in developing their own internal team of coaches as they understand the value and impact that coaching can have on business growth and professional development.